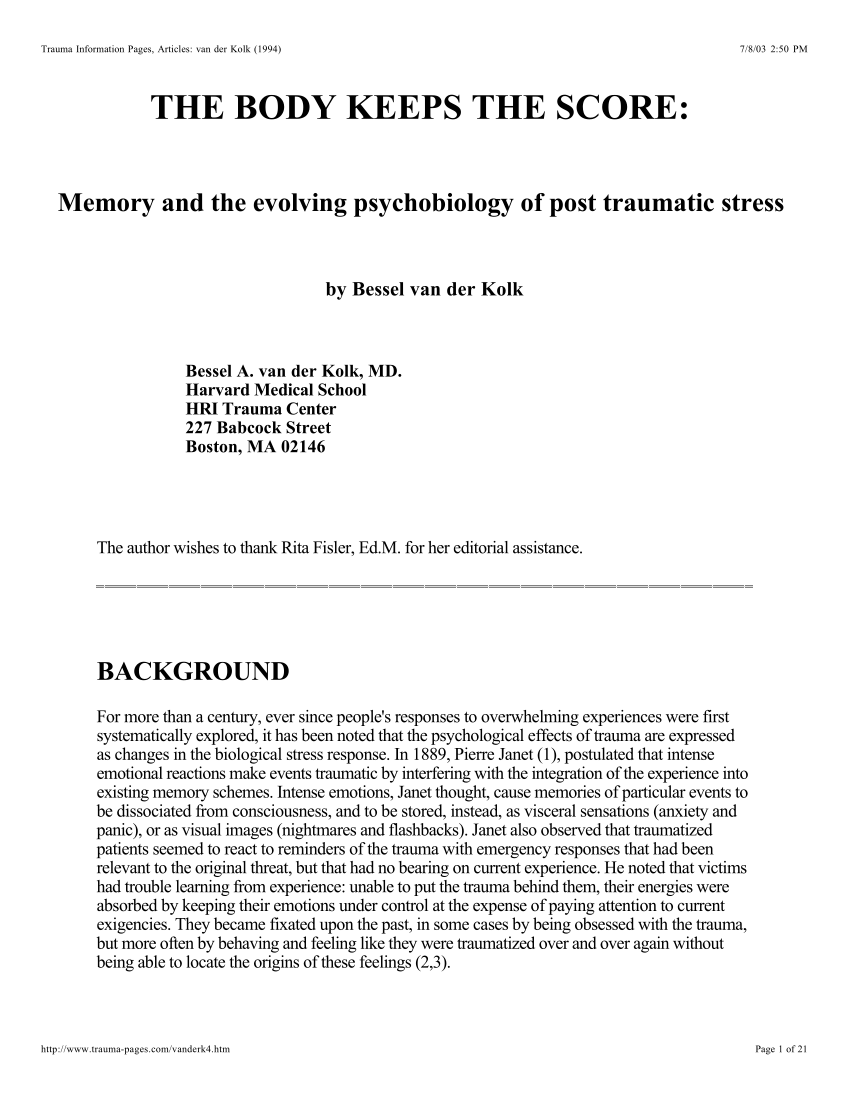 The Body Keeps the Score is a book that explores the history of trauma treatment. Trauma is a complex psychological phenomenon that is still poorly understood, even in psychiatry. The book details how trauma can affect a person and explores how different treatments have adapted over the years.

Trauma affects the brain’s ability to remember, focus, and control emotions. The hippocampus, the center of memory, can be damaged by the stress of trauma. This malfunction in the brain can cause a heightened fear response, making people feel on constant alert for threats. It can also cause difficulty with memory, causing fearful memories to come to mind at inappropriate times. The effect on memory is so severe that it can confuse a person’s sense of “right now” and their ability to tolerate a situation.

To fully understand trauma, it’s important to understand the brain circuitry that shapes the brain’s responses to traumatic events. These circuits determine how victims cope and narrate their experiences. They are influenced by reflexive reactions such as the fight, flight, or freeze reaction, and they register at both the conscious and unconscious levels of the brain.

The human brain’s stress circuit is comprised of three main parts: the amygdala, the hippocampus, and the ventromedial prefrontal cortex. Researchers have found that changes in these areas may be responsible for specific PTSD symptoms. For example, heightened stress hormones in the hippocampus can cause it to shrink, making it difficult for a person to distinguish between the past and present. The hippocampus is also involved in the regulation of emotions.

These findings are encouraging and may lead to new treatments for PTSD. However, there is a need for further research on how trauma affects the brain. Fortunately, the science has evolved quickly in recent years, thanks to the use of new technology and the increased availability of neuroimaging tools. The use of new techniques has allowed scientists to observe and perturb the brain circuitry of individuals with PTSD.

The occurrence of mental health symptoms secondary to trauma is often accompanied by substance use disorders. As a result, the possibility of shared aetiologies remains an important question in translational neuroscience. Advances in genetics and basic science have led to a greater understanding of the neural basis of these disorders. Despite this, frequent comorbidity remains a clinical challenge.

Neurofeedback is a proven method for helping people recover from trauma. It has a range of benefits, including reduced symptoms of depression, anxiety, and PTSD. It also promotes holistic healing. This form of therapy is noninvasive, medication-free, and is a good fit for people who are undergoing treatment for a traumatic event.

Neurofeedback is a treatment that helps trauma sufferers rewire their brain to recover from the effects of trauma. It works by connecting clients to an interface that reads brain waves and then helps them change these waves. This technique has been around since the 1960s, and has been recognized by the Trauma Research Foundation. Researchers such as Ruth Lanius and Sebern Fisher helped to establish the practice and research of neurofeedback.

Neurofeedback is noninvasive and provides immediate feedback. It uses EEG equipment to monitor brain waves and then uses that information to manipulate brain function. Using these signals, patients repeat a series of exercises until they achieve the desired changes. Neurofeedback has been proven to help traumatic survivors rewire their brains and move toward a normal life again. It enables victims to manage attention and emotions again and pursue their goals.

Neurofeedback for PTSD has been shown to increase the hemodynamic activity of the left amygdala (the part of the brain that controls long-term memory and emotional memories). The EEG-fingerprint method has proven to be effective, and this approach is also relatively inexpensive and mobile. It is also known to have high spatial resolution.

Neurofeedback is a promising method for PTSD. It uses advanced computer technology to monitor brain activity. Patients wear electrodes on their scalp and are rewarded based on their brainwave activity. The therapy is based on the idea that the brain is a neuroplastic organ.

Researchers have also shown that neurofeedback for PTSD helps patients reduce their fear response. This technique is similar to exposure therapy, which has been shown to be a successful treatment for phobia and PTSD.

Effect of trauma on a child’s asthma rate

Children exposed to traumatic events are at increased risk of developing asthma. Whether it is physical abuse, sexual abuse, or domestic violence, children can be affected by a variety of traumatic experiences. According to the study, children who experienced five or more ACEs are at greater risk for asthma, compared to children who did not suffer from such trauma.

Exposure to multiple ACEs during a child’s first year of life may have an additive effect on the risk of asthma. This means that each additional stressor increases the risk by more than double. This finding suggests that the impact of multiple traumatic experiences should be investigated further.

In a recent review, researchers evaluated a total of 12 studies and ten articles that investigated the relationship between adverse childhood experiences and asthma rates. These studies included many variables, including maternal mental health and parenting, exposure to violence, ethnicity, and housing conditions. These studies used a variety of measurement instruments to assess the effect of early childhood stress. Ten of these studies reported statistically significant effects. However, two of them were only significant under certain conditions.

According to this study, asthma prevalence in African-American children has increased 50 percent since 2001. The problem has reached epidemic proportions in large cities. In Detroit, for example, more than 24,000 children have asthma. In addition, more than 77,000 of them were exposed to two or more stress-fueling conditions during their childhood. This can impact their health and lead to a lifetime of problems.

Although most children who are physician-diagnosed with asthma have mild symptoms, many children have symptoms of asthma and do not have a diagnosis. Nearly half of them miss half a day of school per month. Another thirty percent miss one or more days of school because they are affected by wheezing and other symptoms. The condition can affect any age or stage in a child’s life.

Effect of trauma on adults

Trauma has a profound impact on our perception of the world and our ability to predict the future. It can lead to a lack of hope, limited expectations, and a fear of the end of life. It can also reduce our ability to anticipate normal life events, such as getting an education, being able to form a significant relationship, or finding good work. Fortunately, trauma is not a permanent condition, and it can be treated.

The consequences of traumatic experiences are often difficult to manage. Some people engage in behaviors that reduce the intensity of emotions and the distressing aspects of their traumatic experience. These behaviors vary widely. For example, some people try to reduce the tension in their lives by engaging in avoidance, self-medication, or high-risk behaviors. Others may subconsciously reenact aspects of the trauma.

Initial reactions to trauma may be complex and variable, and can include exhaustion, confusion, agitation, dissociation, or blunted affect. Despite these early symptoms, most survivors recover and function normally across major areas of their lives. Some, however, may experience longer-lasting symptoms.

In a study that included children and adults, researchers uncovered a significant association between the presence of chronic illnesses and post-traumatic stress. This association was particularly strong among older adults and children. In addition, the results of a four-year follow-up study of adult survivors of the earthquake in Spitak, Armenia, found that adversities were a significant risk factor for developing PTSD. Adverse conditions in the earthquake-ravaged area included a lack of heat, lack of electricity, and the destruction of the physical infrastructure.

Emotional reactions to trauma may vary widely, depending on the individual’s sociocultural history and the type of traumatic event. Among the most common emotions that emerge are fear, anger, sadness, and shame. However, the individual may experience difficulty identifying these feelings. In some cases, they may associate the strongest feelings with the trauma, while others may try to hide them, denying that they have had any feelings associated with the trauma.