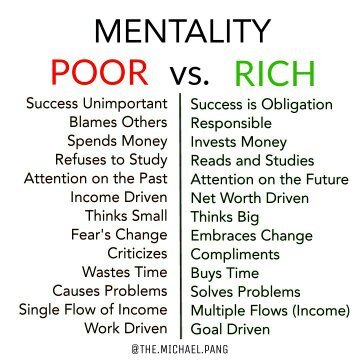 Rich people work for themselves. While a Rich Dad might work for someone for a few years in order to accumulate assets, a Poor Dad will work for someone for his entire life and thinks that this will be the main source of wealth. While this might be true in some cases, it is not the case for everyone.

One of the key lessons of Rich Dad Poor Dad is that being rich isn’t about owning a fancy car or a mansion. It’s about how to make money work for you. Those who follow this mindset are able to achieve financial independence without relying on other people for money.

One of the biggest barriers to wealth is arrogance. Arrogance is the attitude that “I know best.” It is a closed-minded attitude that prevents us from learning and changing our opinions. It’s possible to be extremely intelligent and still be incredibly arrogant. Investing and real estate are two examples of areas where this mindset is extremely detrimental.

In the Rich Dad Poor Dad book, Robert learned that money doesn’t solve every problem in life. He was stuck in a job he didn’t enjoy for very long, and no matter how much money he earned, it didn’t make his life any better. Robert began complaining to Rich Dad about his lack of money and the fact that he didn’t like his job. This made him realize that many people have very little money and are stuck in jobs they don’t like.

The book Rich Dad, Poor Dad outlines the common mindsets of the rich and the poor. Rich Dad, Poor Dad draws on the philosophy of Napoleon Hill’s 1937 Think and Grow Rich as well as George S. Clason’s 1926 The Richest Man in Babylon. It is a self-help classic, but it is repetitive and overflowing with unhelpful diagrams.

Kiyosaki has been accused of selling a get-rich-quick philosophy. He’s been the subject of investigative documentary programs by WTAE USA and CBC Canada. However, Rich Dad Poor Dad promotes financial education and encourages people to start a business or invest in real estate. Its parables and stories will be familiar to readers of financial education, but a few things are worth considering before you buy the book.

When the Rich Dad Poor Dad story begins, Robert Kiyosaki begins by saying that he learned about money when he was nine years old. He grew up in Hawaii and was a middle-class boy. He felt left out by his more affluent friends, and decided to learn the secrets of making money. He began by partnering with a friend, Mike, to take advantage of opportunities to make money.

According to “Rich Dad Poor Dad,” there are two different mindsets that people have about money. One of these mindsets says that wealth is inherited, while the other says that it is something you can learn. The “rich dad” mindset suggests that wealth can be learned through reading, thinking, and talking to people who are already rich. In addition to this, the “rich dad” mindset recommends attending seminars and talking to people who are not rich but are working hard to achieve their goals.

“Rich Dad” is a book that aims to get readers out of their passive mindsets and show them how to become wealthy and achieve financial independence. It explains the differences between a rich and poor mindset and illustrates them with a case study of a rich dad.

A rich mindset is a mindset that helps you buy assets and invest them. It also helps you capitalize on income-generating opportunities. This mindset will help you multiply your money fast. In contrast, a poor mindset causes you to fall deeper into debt and let bad habits get the best of you.

Financial literacy is an important aspect of financial health. It’s crucial to develop the knowledge to make sound financial decisions. There are several different ways to go about this. But, the Rich Dad approach is based on a few key principles. It involves paying yourself first before you pay anyone else. It involves using investment opportunities and organizing your life to maximize your earnings.

This book is written in a narrative style. Rather than chapter headings, it follows a series of lessons that provide a road map to financial literacy. It also contains practical advice based on Kiyosaki’s own experiences. His writing style is friendly and approachable, and he helps readers break down the prevailing myths about money management.

Throughout the book, Robert Kiyosaki stresses the importance of developing multiple skills. This makes you less vulnerable to unplanned career changes. It also means that you can control your earning potential. By developing a broad skill set, you can be more confident about your skills and take control of your future. This is an essential part of financial literacy.